Our response to COVID-19
Labor Day 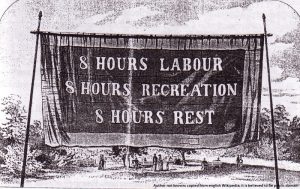 What’s the origin of Labor Day?

Most of you may think that Labor Day is for relaxing, cookouts and shopping which is not a bad plan; but the truth is that Labor Day has a more of a political origin.
One was a “monster labor festival” featuring of a parade of unions and accompanying picnic, which took place on Sept. 5, 1882, in a New York City park. That gathering is thought to have attracted as many as 10,000 marchers, according to Linda Stinson, a former Department of Labor historian. They listened to speeches in support of workers’ rights, and — in lighthearted activities more in the spirit of what goes on today — people drank beer, danced and set off fireworks.

The other event dates from May 11th, 1894, in a company town outside Chicago, employees of the railway sleeping car mastermind George Pullman went on strike when their wages didn’t go up after the economy tanked. In a show of solidarity, the American Railway Union — said to have boasted 150,000 members at the time and led by famous socialist Eugene Debs — refused to operate Pullman train cars, snarling mail delivery and prompting President Grover Cleveland to send in federal troops to break up the strike. Rioting and arson broke out, and it evolved into what’s now considered one of the bloodiest episodes in American labor history.
A national Labor Day holiday was declared within months not only in the USA but also in many other countries around the globe.

Nowadays, Labor Day is observed to celebrate the contributions of organized labor and workers to the prosperity of the U.S. economy.
Our Response To COVID-19