Our response to COVID-19
If You’re Hit by a Ball, Can You Sue? 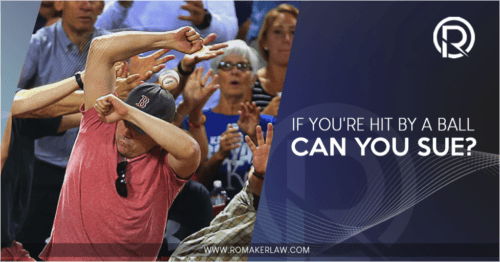 Spring is here, and with it, the baseball season!

A not uncommon occurrence at a baseball stadium is a fan getting hit by a ball, and some of these injuries can be severe.

What are the fan’s legal rights? If you turn over your ticket to the sports event, you will see a paragraph or two of legal language in small print. This is the stadium owner’s attempted disclaimer of legal responsibility for any injuries that might occur to fans at the stadium. The disclaimer will usually say something like balls and even players occasionally leave the field of play, that the balls might be traveling at high speeds, and that the fan assumes the risk of injury from any balls or players that leave the field of play.

Let’s say that you get hit by a foul ball at a baseball game. Is this disclaimer really valid? While every state’s law is different, these disclaimers are valid, with exceptions.

The stadium owner still has an obligation to act reasonably to minimize the risk of injury to spectators. That is why all baseball stadiums have netting behind home plate to protect against foul balls. The netting is behind home plate because balls that are fouled straight back are going so fast, and the spectators are so close, that a spectator could not reasonably get out of the way. However, although home run balls also leave the field of play, there is no netting in the outfield because the balls are not traveling as fast and because the spectators in the outfield seats have had four or five seconds to track the ball traveling toward them.